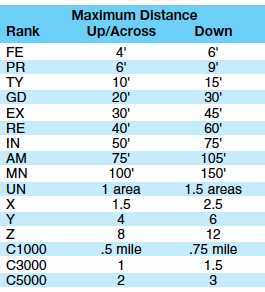 The Power rank determines the distances the hero can safely leap.

The hero can jump great distances. By repeated leaps, the hero can rapidly cover large distances. This Power’s minimum rank is +1CS greater than the hero’s Strength rank. If a lower rank is initially rolled, it must be raised to this level.

Innate safeguards in this Power enable the hero to safely land. (Otherwise he might break a leg attempting even a Good leap.) The effect is the same on the hero as if he were a Normal Human making a 2 foot leap up or across or descending 3 feet.

The effects on the area the hero lands on might not be the same as if a normal jump occurred. Consider that the Hulk  splinters the pavement when he lands. To determine what sort of effects occur when the hero lands, the Judge should figure what kind of damage results when a weight five times that of the hero suddenly drops on the surface in question.

The actual landspeed varies with the angle of the leaps. The average landspeed for Hyper-leaping is a -3CS Land Movement rate. For example, an Excellent Leaper can travel 30 mph in a series of rapid 30-foot leaps. If the hero also possesses Hyper-speed, that can be added to this Power’s rank number for additional speed by increasing the frequency but not the size of the leaps.

Physical burdens do not decrease the hero’s speed, although they might decrease his control. Anything the hero is carrying is also protected by the innate safeguards against damage; the hero acts as a shock-absorber.

While the hero has a vague idea of where he is going, he can’t see his touchdown point. This can be a real hazard when the hero can make Monstrous leaps or better. For example, while leaping cross country, the Hulk landed on seven cars (two were moving at the time), one semi truck, eight roofs, a swimming pool, ten mud patches, one river, twelve power lines, three street lamps, 57 trees and bushes of various sizes, and a late Merino ram named Herbert. Judges can assume that the hero has enough control on his descent that he can swerve to avoid dangerous landing sites. The player must make a green Reason or Intuition FEAT (whichever Ability has the higher rank) every ten leaps to make sure he doesn’t come down on something he’d rather not have come down on.