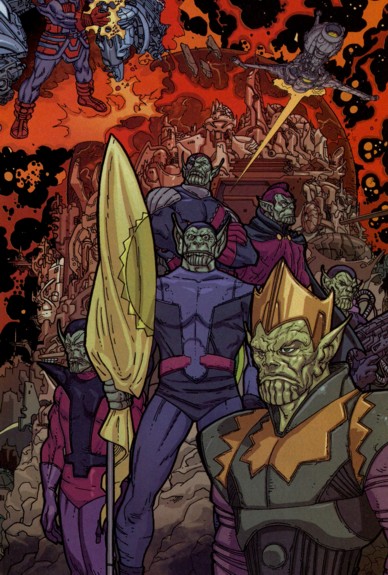 The Skrulls are a breed of green-skinned humanoids from the Andromeda Galaxy. They are a fierce warrior race who carved for themselves the oldest interstellar empire in the Universe’s history. Skrull science is generally at a higher level than the science of human civilization. The Skrulls were ruled by an Emperor or Empress, who had absolute power.

In the beginning the Skrulls were a peaceful, scientifically inclined race on Skrullos, a planet in the Drax system. Almost a billion years ago the Celestials arrived and experimented on the Skrulls’ reptillian ancestors. As the Celestials did with humans, they split the species into three branches: the “normal” branch who were capable of eventually rapidly evolving into Celestial-like beings, the shapeshifting Deviant branch, and the immortal Eternal branch. As in the case with humans, the Deviant and Eternal branches went to war. Unlike the case with humans, however, the Deviant branch wiped out all other Skrulls, thus all modern Skrulls were descendants of the Deviant branch. The Skrulls later split into two more groups, being the modern Skrulls and the Dire Wraiths, a parasitic race that could still shapeshift and had use of magic, but were not as technologically advanced as the Skrulls. Dire Wraith’s are analogous to the Skrulls as vampires are to humans.

Their shapeshifting powers aided the Skrulls’ departure into space. When they encountered a new race, they simply transformed themselves to resemble that race. The Skrull empire that resulted from these contacts was based on free trade and mutual cooperation.

Their scientists also formed the first Cosmic Cube that later became the Shaper of Worlds.

Pointed ears, corrugated chins, green skin. Most males are bald and have no facial hair. Females have full head of hair. Most Skrulls are physically malleable, able to alter their shape size, and/or color at will. 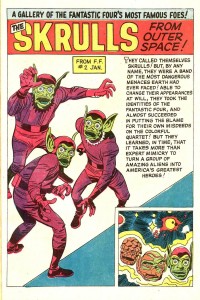 Adult Skrulls typically range from between 4 to 7 feet tall. They are bilaterally symmetric, with two legs and arms terminating with feet and hands respectively. Skrull hands have four independently moving fingers each with opposable thumbs. Skrulls have heads which have two forward facing eyes, giving them precise stereoscopic vision. Skrulls typically are covered in short, almost transparent, hair over most of their bodies but exhibit thicker tufts of hair on top of their heads. Skrulls have a green skin pigment, pointed ears, and ruffled chins. Most Skrulls also have the ability to shapeshift into other beings and objects

Skrulls are green-skinned reptilian humanoids with large pointed ears, red or green eyes, and corrugated chins. Skrulls are known for genetic and molecular instability, and genetic diversity, due to Celestial experimentation creating the Skrull “Deviants” (now the only surviving Skrulls). The Skrulls are known for their physical malleability and ability to shapeshift to any size, shape, or color at will, taking on the appearance but not the characteristics of other beings and objects within a volume range of .75 to 1.5 times the Skrull’s original volume. Skrulls are able to assume virtually any form, be it organic (e.g. cows) or inorganic (e.g. lamp). As a result, the Skrulls excel at spying and infiltration. Skrulls are also able to use their shapeshifting abilities to form weapons (e.g. blades and clubs) with parts of their bodies, making them dangerous hand-to-hand combatants.

Their sexual dimorphism is roughly the same of a human being, but their sexual orientation is more complex since they can change their genders at will. Skrull females do not give live birth; instead, they lay eggs like their reptilian evolutionary ancestors. Skrull children are known as “hatchlings”. Despite their reptilian evolutionary roots, however, Skrull females had mammary glands and nursed their young.

It was known that Skrulls were capable of producing hybrid offspring with humans and Kree: the Skrull Lyja was able to conceive with the Human Torch, and Hulkling is the son of the Kree military officer Mar-Vell and the Skrull princess Anelle.

The Skrulls later developed the ability to render themselves undetectable when using their shapeshifting abilities, even from telepaths and those with superior senses.

Courtesy of their advanced technology, the Skrulls have also been able to augment their abilities in certain warriors, such as the Super Skrull and War Skrulls – an elite group who with special encoding are able to emulate the powers as well as appearance of their templates.

It is believed that Skrulls’ eyes are incapable of subtle visual perceptions as those of Earth humans, e.g. Skrulls once mistook samples of drawn artwork for photographs. 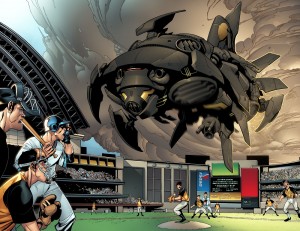 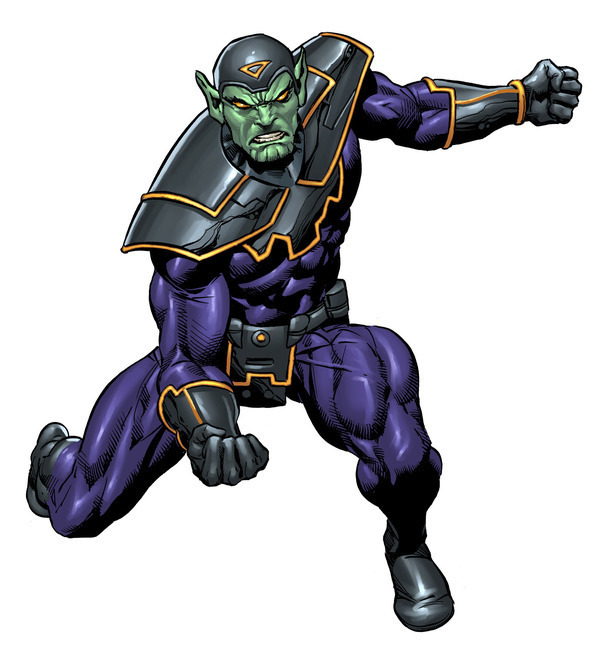 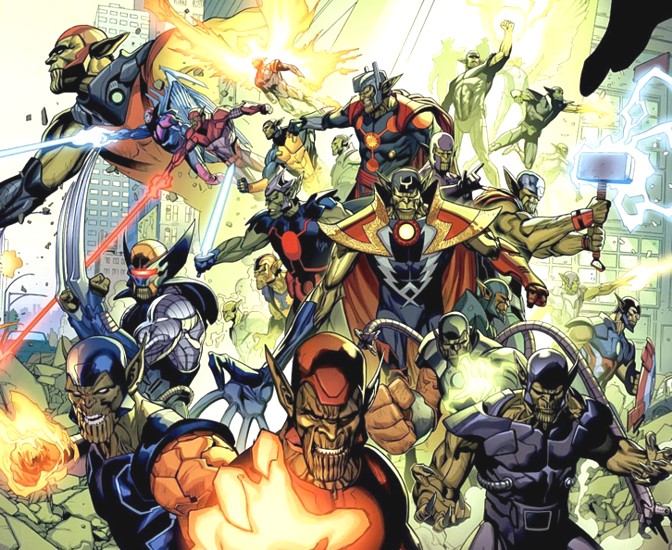