During the earliest recorded days of human history, a group of Egyptians fought back an alien invasion. Spurred by this, the survivors formed two secret organizations – the Brotherhood of the Shield and the Brotherhood of the Spear. The Brotherhood of the Spear spread out, ingraining itself into all facets of human society – science, magic, politics – like a multi-headed beast, apparently destroyed around the time of the French Revolution. And although it went by many names – the Cathari sect, the Thule Society and all its antecedents – it is under the name of the many-head HYDRA that it is most well-known.

Formed during World War II, HYDRA originally had a State Shinto Imperialist as its Supreme Hydra. Baron Strucker slew and replaced this man, but Captain Savage and the Leatherneck Raiders thwarted Strucker’s attempt to gain an A-Bomb. HYDRA then clashed with the Invaders. Earlier, Strucker had uncovered Gnobian advanced technology, while he also time travelled to the future from 1942.

HYDRA’s history is a long, tumultuous and convoluted one, spanning the decades from the end of the Second World War up to the present day, tied directly to surviving fugitive members of governments of Nazi Germany and Imperial Japan. 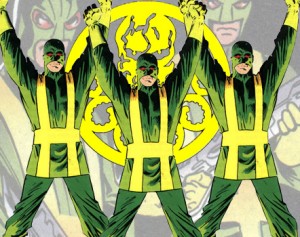 Shortly upon joining the original HYDRA, Von Strucker seized control of the organization from its Japanese founders and slowly steered it towards the goal of conquering Earth. That campaign brought him into conflict with Charles Xavier and the future Magneto among others, and once HYDRA became more brazenly public in its operations, eventually led to the creation of the agency known as S.H.I.E.L.D. S.H.I.E.L.D. was formed by HYDRA proxies in the UN specifically to gain power and information in ways that HYDRA never could from its position then. After the apparent assassination of S.H.I.E.L.D.’s first executive director, Nick Fury was appointed as executive director. This decision, after several HYDRA campaigns including the creation of the Overkill Horn (designed to detonate all nuclear explosives worldwide), and the bio-engineered “Death-Spore” Bomb, led directly to von Strucker’s first death at the hands of Fury and several deceived HYDRA operatives.

In the wake of von Strucker’s first death, the surviving elements of HYDRA broke into factions that each adopted its own reorganized modus operandi. Several of these factions developed “super-agents” that would occasionally break away in turn to become freelance operatives, or, in some rarer cases, superheroes such as the first Spider-Woman. Von Strucker was eventually revived and reunited several of the HYDRA factions under his leadership to renew his campaign against S.H.I.E.L.D. and humanity for several more years.

Despite his reorganization of the group, various independent HYDRA factions continue to operate around the Marvel Universe, and a HYDRA Civil War would later result. While Baron Helmut Zemo had Strucker placed in stasis for his own ends, Gorgon and Strucker’s second wife Elsbeth von Strucker mystically created a clone of Strucker who they set up to fail, allowing for a public execution of him, after which – as part of an alliance with The Hand, they utilized an army of brainwashed superheroes and super villains, including Northstar and Elektra to launch a massive assault on SHIELD. The assault was ultimately repelled and Wolverine would kill Gorgon.

Simile was one of the most active field agents during their Chicago invasion, here she is depicted posing as Madame Hydra

An offshoot of HYDRA led by the enigmatic Grandmaster infiltrated Stone Dynamics, a multi-national defense industry contractor based out of Chicago, Illinois. For a decade they had syphoned funds to develop an arsenal that was being kept in secret installations all around the city.  Their plan was to entrap the city within an impenetrable force-field, thereby isolating the populace. Through genetic manipulation they would convert them into an army of unthinking thralls, from there they would launch their invasion of the United States. Had it not been for the interference of the Chi-Town Champions their plans would have gone unnoticed by the super-hero community.  In the end the team managed to disable the field and take down the main HYDRA battle station and defeat the Grandmaster, who was revealed to be Thomas Stone Senior the supposedly deceased CEO of Stone Dynamics. With the aid of a combined task force of SHIELD and the Avengers, Thomas Stone Junior managed to root out the HYDRA cells that had been active within the corporation.  As of today the remnants of the midwest HYDRA cell have been accounted for. However, it is rumored that AIM has been taking over the abandoned HYDRA facilities. Their plans remain a mystery.