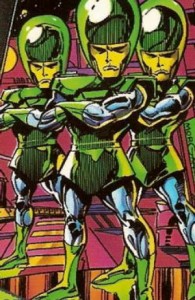 Representatives: Tana Nile, Grand Commisioner of Rigel
Attitude Toward EARTH: Hands off
Notes: The Colonizers of Rigel are a highly developed race who have created an empire spread across several galaxies. Although individuals are peaceful, the race is imperialistic and chauvinistic. They dislike living in close proximity each other and thus seek new worlds as personal dominions. Unfortunatley the Rigellians tend to ignore the fact that many of their newly chosen worlds are already inhabited. Colonizer Tana Nile once claimed Earth but her claim was contested by Thor. After Thor defeated Ego the Living Planet, the Grand Commissioner of Rigel voided her claim and, more importantly, exempted all humanoid-inhabited worlds from future Rigellian colonization. Using their advanced robotoic technology, the Rigellians created the Recorders to gather information and the Indestructibles to act as warriors.

History:
Rigellians, also known as the Colonizers, are a technocratic empire. They have colonized countless planets in numerous galaxies. They possess psionic abilities which allow them to control others mentally or physically, most notably the Mind Thrust. They can also mentally change their physical density at the speed of thought which allows them to resist any physical forces. They thrive to build an empire via colonization. 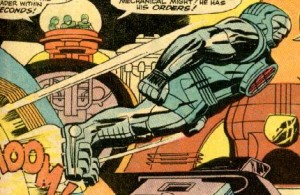 Equipment:
Its fists are equipped with a disintigrator beam which can dissolve the hulls of spacecrafts, and a gamma-powered immobilizer beam.

Weakness:
The Asgardian Thor once turned its own immobilizer beam upon itself, and it was rendered inert by its effects. Thor V.1 #132 (September, 1966)

Occupation: Servant of the Colonizers of Rigel

History: When the Asgardian Thor invaded the Rigel star system, intending to destroy the Rigellians’ Space Lock, the Rigellians deployed the Indestructible to stop him. It boarded the Rigellian vessel Thor had conquered, blasting through the hull, and engaged him in battle.