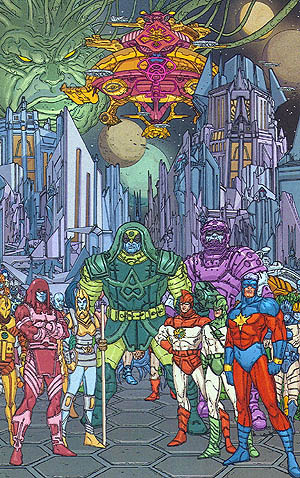 The Kree is an extraterrestrial humanoid race who have created a vast empire in the Greater Magellanic Cloud and have, on certain occasions, trafficked with the beings of Earth. The Kree race began on the planet Hala in the Pama system long before the first mammals appeared on Earth. The original Kree had blue-colored skin (later generations interbred with genetically-compatible aliens to produce the pink-skinned second race). Outwardly humanoid to a large degree, Kree bodies are adapted to environmental characteristics on Hala that are un-Earth-like: notably, higher gravity and higher nitrogen content in the atmosphere. Although the Kree cannot breathe Earth’s atmosphere without special apparatus, their denser bodies afford them about twice the average human being’s strength and endurance. Despite their physical superiority and relatively advanced technology, the Kree race has reached the pinnacle of their evolutionary development.

The Kree Empire extends across thousand worlds in the northwestern lobe (Earth reference) of the Greater Magellanic Cloud. The Kree began their empire over a million years ago, within 100 years of acquisition of interstellar technology from then-benevolent race of Skrulls. The Skrulls at the time were attempting to foster a galactic empire based on free trade, and they landed on Hala to help the barbaric natives advance to the point where they could join. Finding that Hala boasted two equally intelligent life forms, the humanoid Kree and plant-like Cotati, the Skrulls proposed a test to determine the worthier race. Enraged that the Skrulls chose the Cotati as superior, the Kree slew the Skrull ambassador and seized the starship and its attendant technology. Mastering it within two generations, the Kree began to attack the Skrulls, thus beginning their now eons-old Kree-Skrull War.

Though Hala is the planet of the Kree’s origin, the planet Kree-Lar in the Turunal system is the capital of the Kree Empire as well as the seat of the government. The Kree Empire is ruled as a militaristic dictatorship. The permanent ruler is the organic computer-construct called the Supreme Intelligence, an immense computer system to which the preserved brains of the greatest intellects of the Kree race have been linked. Aiding the Supreme Intelligence is a number if imperial administrators on Kree-Lar, appointed governors of each of the member-worlds, and a vast standing space militia. The Empire also employs powerful automatons called Sentries to keep member-worlds under surveillance, such as Sentry 459, which guarded an outpost on Earth before the Fantastic Four stumbled upon it and inadvertently destroyed the island and its guardian.

Although Earth is in a different galaxy from the Kree Empire, the Kree have become aware of the small planet and have frequented it and its solar system over eons. The Kree first learned of Earth from the Skrulls who deposited them and the Cotati on Earth’s moon for the test of worthiness (the Kree built a city in the Blue Area of the Moon). Once the Kree-Skrull War began, the Kree deposited a Sentry and a weapon depot on the planet Uranus, hoping to maintain a strategic site near one of the Skrulls’ known intergalactic space-wrap routing access-points. When the human race began the Kree learned of the vast genetic potential in the Earth’s dominant life form, and created an evolutionary-accelerated tribe of humanity called the Inhumans. Despite frequent surveillance, the official policy of the Kree government is that Earth is minor, limited-potential planet of little importance. The upper echelons are aware of the truth, however: not only is Earth is a strategic military position, but its denizens possesses the genetic potential to be a serious threat to the already-decaying Kree Empire and race.

Adult Kree typically range from between 5 to 8 feet tall. They are bilaterally symmetric, with two legs and arms terminating with feet and hands respectively. Kree hands have four independently moving fingers each with opposable thumbs. Kree have heads with two forward facing eyes, giving them precise stereoscopic vision. Kree are typically covered in short, almost transparent, hair over most of their bodies but exhibit thicker tufts of hair on top of their heads. There is another type of Kree called the “Ruul” who are able to shapeshift and can survive in any hostile environment.

Biology
True Kree resemble humans almost exactly, with the exception of blue skin. Kree have a higher strength level than that of a human, and require more nitrogen to breathe comfortably. Kree bodies are adapted to environmental characteristics on Hala that are un-Earthlike: they have a higher gravity and a higher concentration of nitrogen in the atmosphere. Under Earth’s lesser gravity their strength and speed increase. However, they cannot breathe in Earth’s atmosphere without using a chemical, “breathing formula”, or artificial life-support devices.

The original Kree had blue-colored skin, but a second racial group with pink skin resembling that of human Caucasians emerged over the millennia. Presently, the blue-skinned “purebred” Kree are a small, but powerful, minority. Pink Kree are much more durable than their blue racial brethren.

Adult Kree range (typically) from between 5 to 8 feet (2.4 m) tall. Bilaterally, they are symmetric, with two legs and arms that end in feet and hands respectively. Their hands have four independently moving fingers each with opposable thumbs. They have heads with two forward-facing eyes, allowing for precise stereo

scopic vision. Adult Kree are usually covered in short, almost transparent, hair over most of their bodies, but sport thicker tufts of hair on top of their heads. Some female Kree can physically influence men, and a few can even drain the life force of others.

The Kree were an evolutionarily stagnant race. In an attempt to further their development, some Kree bred with other species, producing the ‘pink-skinned’ Kree, who are similar in appearance to Caucasian humans. These pinks (also called ‘whites’) eventually outnumbered the blue-skin Kree. The Kree value what they consider to be their genetic purity, to such an extent that reproduction outside of the species is a strict taboo. In the Kree empire it is a crime for a male non-Kree to impregnate any Kree.

The Supreme Intelligence attempted to jumpstart the evolutionary process of the Kree. Through a series of events discussed below during Operation: Galactic Storm and the Destiny War, he arranged for a large number of his people to be irradiated with a Nega-Bomb (killing 90% of the Kree), and then artificially sped up their evolution by means of an artifact called the Forever Crystal.[volume & issue needed]
This new brand of evolved Kree, called Ruul, have a grayish skin tone and many shoulder-length tentacles atop their heads. Individuals possess the ability to ‘will’ adaptation to different environments, spontaneously developing the ability to breathe underwater, fly, or whatever their circumstances require. 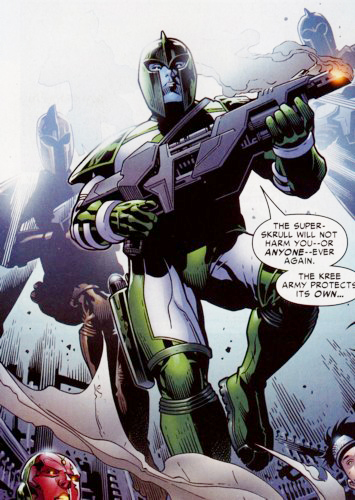 Known Powers:
Kree Physiology: The Kree have evolved with greater strength than Earth humans in order to combat the heavier gravity of their home worlds. 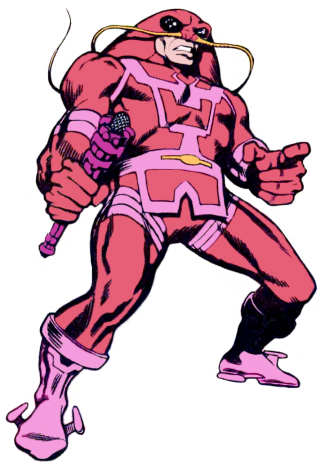 Known Powers:
Kree Physiology: The Kree have evolved with greater strength than Earth humans in order to combat the heavier gravity of their home worlds. Pursuers have  been impregnated with circuitry and power cells to grant him these powers: 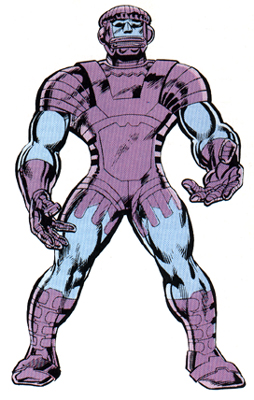 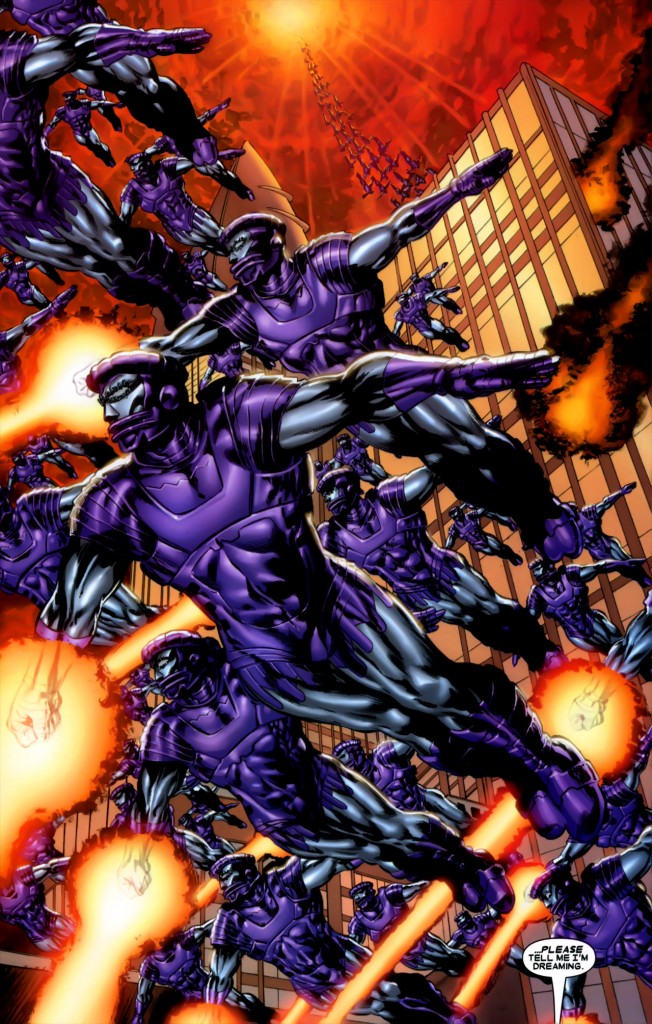