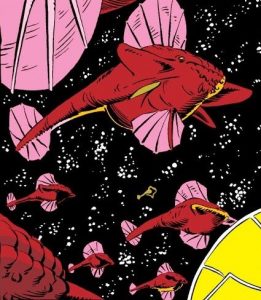 The Acanti are huge, sentient beings that have roamed the spaceways since creation in the endless pursuit of knowledge. They have a “racial soul,” a knowledge/religious existence that is within their leader, the Prophet-Singer. The songs he sings–which the Acanti repeat–over the vast reaches of space keeps their society alive. If he were to die before passing on their knowledge and beliefs, the race would soon die.

In their drive for galactic domination, the Brood have used their bioengineering skills to turn the Acanti into living, mindless starships. They lobotomized the Acanti; equipped them with cybernetic controls, which provided the Brood pilots with Good control; and outfitted the creatures with weaponry such as lasers that cause Monstrous damage. While the Brood fly the cosmos, spreading their empire, they feed off of the inside of the Acanti. Eventually, the creatures die from flight exhaustion and internal damage. Their huge rotting corpses are then “beached” on a planet, where they serve as food sources for a colony, and their bones provide the structures for Brood buildings. Recently, the X-Men and Starjammers destroyed Broodworld and, hopefully, have stopped the slaughter and hideous use of these wondrous creatures.

Brood Equipment
The Brood have captured and enslaved many Acanti, lobotomized them, and equipped them with cybernetics. These Acanti have been fitted with hundreds of laser batteries that can do Monstrous damage. They also carry hundreds of photon torpedos that do Monstrous damage. The Acanti can easily carry millions of Brood inside them; but because the Brood are consuming the creatures from the inside, they are limited to about 100,000 in order to prolong the lifespan of these living ships.