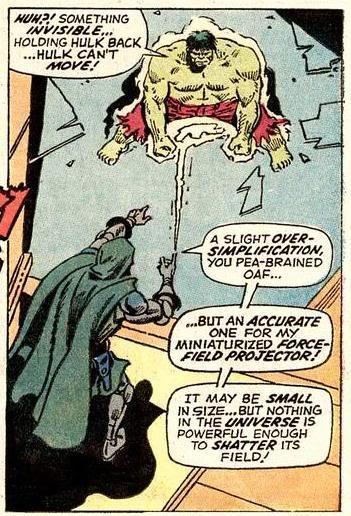 Doctor Doom, demonstrating how annoying projected force fields can be.

Force Fields are a common form of defense encountered in combat, and range from the personal to the projected. Force Fields protect as Body Armor, but are primarily effective against Energy attacks at the listed level, and are – 10 against all other attacks.

A character with Force Field and Body Armor may use one or the other against any attack, but not benefit from both at the same time.
If a Force Field is projected by a third party in front of the character with Body Armor, the Force Field takes damage and, if it collapses, full damage is inflicted on those within. In this case Body Armor is applicable to reducing damage.

If the accumulated amount of damage incurred in a round from all forms of attack is greater than the rank number the force field is breached. If there is a Monstrous (75) force field, then up to 75 points in a turn may be absorbed. At 76 points the force field fails.

Claws and other sharp instruments do not affect Force Fields with their material strength.
They only inflict their normal damage in overloading that Force Field.

A single character may be unable to pierce an enemy’s Force Field or Body Armor, but two or more individuals striking at the same spot may be able to affect the foe.
As with combined material Strength FEATs, the two must inflict damage within in points of each other. The higher total is raised to the next rank of damage, at the lowest point (88 for Unearthly, etc.) providing the individual with the lower damage ability makes an Agility FEAT (the one with the higher FEAT must score a normal hit). This applies to Slugfest, Charging, and Energy and Force Powers.

Force fields as a Power:

Force Field Generation: The hero with this Power can create force fields that will protect himself and possibly other allies. The source of the power varies depending on the hero. The hero with this Power can generate a force field that covers an area equal to the “tens” place of the rank number. A character with a rank number of 70 may cover 7 areas. For every area covered beyond the first, the strength of the force field is reduced by one rank. A force field encompassing 7 areas would reduce the effects by – 6CS. A hero may choose to have a personal force field at +1CS instead of being able to project force fields. This choice is made at the start of play, and as such cannot be changed.

Posted in Players Book Powers
Check out our Downloads section!