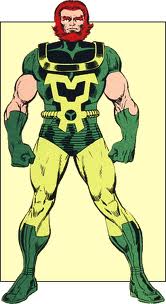 Leader of the Eternals.

Zuras was the first Eternal to form a Uni-Mind, and was chosen by the Eternals to lead them following Kronos’ death. He was mistaken for the Greek god Zeus many times in the past, and ultimately forged a pact with Zeus to keep their people at peace. Zuras aided Ajak in preparing a flight plan for the 3rd Host when they left earth. In 1823, Zuras ordered Ikaris to assume the identity of “Ike Harris” and to prepare for the arrival of the 4th Host. When Kro spread chaos in the 1940s, Zuras sent Makkari to oppose him. At some point, Zuras fought Dromedan, and placed the Neutralizer Helmet over his head, then sealed him below New York City in a crypt. He also forced the Forgotten One into exile, stripped him of his name, and forbid the Eternals from communicating with him. Zuras appears to have been well-travelled, since his quarters in Olympia were decorated with a jukebox, two six-shooters, & battle-axes.

Zuras authorized Thena to resume her battles against the Deviants, and ordered her to battle against Zakka in New York. Zuras also ended the battle with the Hulk Robot by dispersing its energies, and then fought Dromedan again. He also aided Mr. Bradford, a government agent, in studying the Celestials. Zuras allied himself with Odin in his assault on the 4th Host, and formed the Uni-Mind for battle. However, the Uni-Mind was blown apart by the Celestials, and the backlash killed Zuras. Even then, Zuras’ spirit continued to exist within his body, until his body was finally destroyed by freeing Thena from a Brain-Mine. Zuras’ spirit still seems to exist, as it has appeared at times within Olympia.