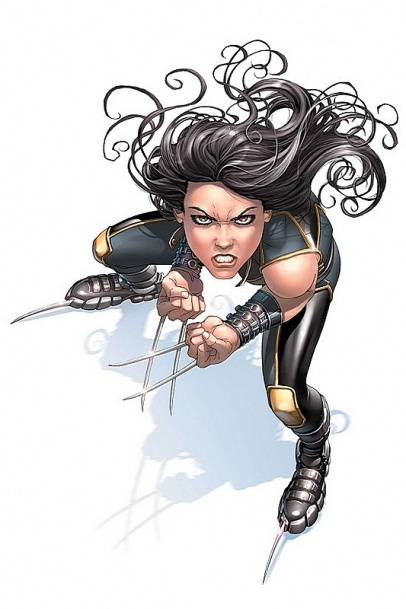 Martial Arts, A, B, Acrobatics, Tumbling

X-23 is the result of a secret, possibly government-run program that spun out of the ruins of the original Weapon X program. The project director, Martin Sutter, was part of Weapon X, and in fact adopted, Zander Rice, the son of a colleague killed by Wolverine during his escape. That colleague was the only one able to escape the program with a sample of Wolverine’s genetic code. However, the sample was damaged and after years of trying to clone it, Sutter brought in Dr. Sarah Kinney to complete the project.

Kinney discovered that the damage was centered around the male Y-Chromosome, and offered to work around the damage by creating a female clone, but the project directors, now including Zander, rejected the idea. Kinney secretly created a female clone anyway, and when the male clone eventually proved completely unworkable, her embryo, the 23rd in a series, was discovered. Zander, upset at his loss of position to Kinney, cruelly forced her to accept the embryo in vitro and bear it to term.

When the child was born, Rice tried to cut Kinney out of the loop, but she convinced Sutter to give her time with her “daughter” to better “control” her. Kinney read books on war and tactics to the subject, called only “X-23,” but managed to sneak in some fairy tales as well. X-23 was trained in numerous martial arts and in the use of a a plethora of weapons, though of course her integral weapons were more formidable. Her sensei also tried to treat her like a normal person, but was warned not to do so by Rice. At age seven, Rice induced her mutation with radiation, and the claws popped, whereupon X-23 was given the adamantium bone-coating treatment. The next day, she was driven into a berserker rage by a scent trigger and sliced up her sensei, part of Rice’s plan to eliminate personal contacts with his assassin.

On her first mission X-23 posed as a cripple to gain access to a Senatorial candidate’s entourage and slaughter them all. Bidding for her services then started at a million dollars a head. She enjoyed uniform success until Zander forced himself into one mission, then left her to die before her mission time limit had expired. X-23 was presumed dead, but she managed to fight her way out and back to the project facility. At this point, she developed an obsessive-compulsive need to hurt herself by scratching X’s into her forearms.

Rice then sent X-23 to kill his mentor, Martin Sutter, and Sutter’s wife and child (who was really Zander’s son from an affair). X-23 killed the adults but spared the child. Shortly afterwards, with Kinney’s help, X-23 beat Rice to a pulp, destroyed embryos 24 through 50 and escaped the project, but Zander dragged himself out of the facility. Rice triggered X-23’s berserker rage with a pheromone and caused her to stab her mother. When her rage cleared, Kinney told her she was named Laura before dying. X-23 found Kinney’s letters to her and some information on the Xavier Institute, and made her way to New York City, where she fell into prostitution for a pimp named “Zebra Daddy.” One night, one of her clients killed himself in front of her, but a precog named Kiden found X-23 before the cops got to her and arrested her.

A few weeks or months later, X-23 was trying to help a mutant and his human girlfriend when the X-Men ran into her in “Wannabes,” a club for humans dressing as mutants. X-23 was wearing a replica of the Imperial Guardsman Fang’s costume, and took out Wolverine in a few seconds, but was finally subdued by the X-Men. When they found out that X-23 was not a kidnaper but was trying to help, they took her with them to the Institute.