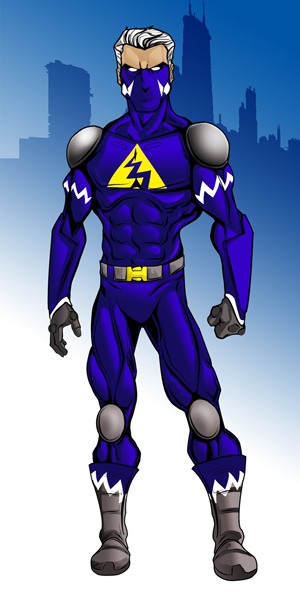 Armando Bauer was born in Buenos Aires, Argentina. He was abandoned as a child and left in the care of Reverend Martin Crenshaw and his wife Sylvia, a missionary couple working with the United Christian Front, a humanitarian organization based in the U.S. The Crenshaw family legally adopted Armando before moving back to the states. Once in the states the couple did their best to give Armando a normal childhood. He graduated from high school with honors. Armando entered college to study computer sciences, specializing in theoretical information systems and artificial intelligence. While working at the university’s computer lab on his thesis a lightning strike overloaded the main server’s surge protectors and caused an explosion. Thousands of volts coursed through his body.  The lab was destroyed completely but Armando had miraculously survived unscathed.  His family wrote off the accident and his survival as divine intervention. As weeks passed Armando noticed other changes, he found himself more nimble and agile. At the same time machines would short out around him and his body would discharge small amounts of electricity. He was forced to avoid human contact for fear of harming those around him. Looking for answers, his father took Armando to meet Robert Morgan (The Golden Age Hero Lash Lightning) who became his mentor, teaching him how to fight in hand to hand combat and how to control his powers. Once his training was complete Armando set off on his own to make a difference and serve his fellow man.

Currently Armando works as an independent  consultant for fortune 500 corporations. He is based out of Empire City where his mentor lived before passing away. On his will Morgan named Armando his sole beneficiary, leaving him a large fortune and the deed to his gym.  There he trains and reaches out to troubled youths and out of luck meta-humans.