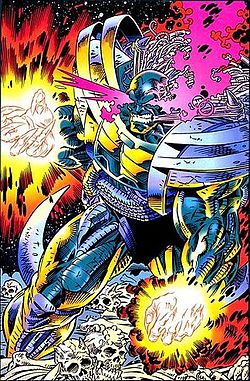 In the universe’s infancy, shortly after Galactus first felt the pangs of his great hunger, the world-devourer constructed a being in his own image and gave it life. Galactus designed this being so that both creator and creation drew upon the same biospheric energy, allegedly to hold the creation in check. The creation was not content with his lot and grew jealous of his creator. Where Galactus was satisfied to survive, his creation wished to conquer, to rule.

This creation, who would become known as Tyrant, became a conqueror, subjugating the worlds that would bend to him and destroying those who would not. He forged a vast empire encomposing whole galaxies, ruling with a pitiless hand from a planet-sized fortress. His regime was not without its opponents. A race of warrior women, calling themselves the Spinsterhood, arose to resist him and his automated armies. The Spinsters believed themselves responsible for the eventual defeat of the despot, as he retreated into uncharted space. In truth, the architect of his downfall was Galactus. Galactus confronted Tyrant over his betrayal in attempting to wrest the universe from his grasp. After a devastating battle that laid waste to the galaxies around them and cost them both much, Galactus proved triumphant, reducing Tyrant to his current size and form. The Spinsterhood then drove Tyrant and his armies into exile past the boundaries of known space. For ages, Tyrant waited in the “darkest corner of the universe,” biding his time as he absorbed vast stores of energy, until he was strong enough to reclaim his empire.

The return of Tyrant was detected by the sensors in the stasis chamber of Ganymede, last survivor of the Spinsterhood, and she awakened and prepared to battle against him once again. Tyrant returned from his exile only to clash with opposition including the Silver Surfer, Gladiator, Morg, Terrax, Beta Ray Bill, Jack of Hearts and Ganymede. Tyrant fought off his attackers, dropping even the powerful Silver Surfer, leaving none to stand against him however he was forced to withdraw due to the intervention of Galactus.

Later, Tyrant challenged Galactus to a fight to the death. As Galactus and Tyrant battled, Tyrant revealed that he could actually absorb power from Galactus’ attacks as he was powered by biospheric energy. As the struggle continued, Galactus had his ship contain Tyrant, draining his biospheric energy in an effort to slay him. However,Tyrant’s control of the energy, as well as his ability to bend other constructs to his will, proved superior, and he reversed the flow, draining Galactus’ biospheric energy instead. Galactus collapsed to the ground and Tyrant began to slash away at him with his talons, but then Morg arrived with the Ultimate Nullifier. Morg blasted Tyrant with the Nullifier-weapon, disintegrating his legs. Galactus feared the energies being unleashed by the weapon, yet proved unable to dismantle the weapon in his weakened state. When the Silver Surfer arrived on the scene, Galactus directed him to stop Morg. The Surfer’s attack arrived in time to save Morg from a second, lethal blast from the weapon, but the weapon, as anticipated, began to overload. Galactus sent the Surfer away before the Nullifier could explode, and Morg cut off his own arm and then fled in an effort to escape it, but apparently only the Surfer made it out in time. Galactus, his worldship, Morg, Tyrant all vanished in the ensuing explosion.

Galactus has since reappeared, showing that he had not died after all.