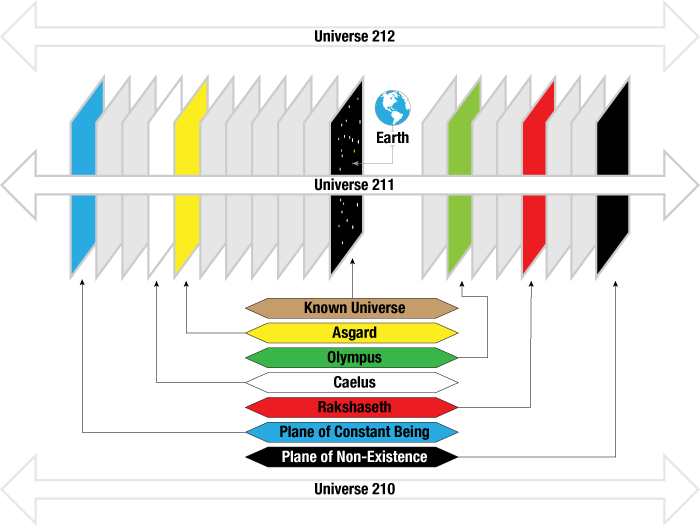 The Endless Realms. At the core lies the planar axis from whence all the other planes came to be.

The Endless Realms of Universe 211

The multiverse is a set of multiple possible universes (including the historical universe we consistently experience) that together comprise everything that exists and can exist: the entirety of space, time,matter, and energy as well as the physical laws and constants that describe them. Each universe is comprised of an endless number of planes of existence. The planes of existence are different realities with interwoven connections within a universe. Except for rare linking points, each plane is ruled by its own natural laws.

The planes break down into a number of general types, these types aren’t exclusive,but most planes fall neatly into one category.

This is the plane of existence that we refer to as the “Known Universe”.

This mixed bag of planes are grouped together by a common use: getting from one place to another. The Astral Plane is used to reach other planes, while the Ethereal Plane and the Plane of Shadow are both used for transportation within the Material Plane they‚ are connected to. These planes have the strongest regular interaction with the Material Plane and may have native inhabitants as well.

Also called planes of power, these realities are incarnations of the basic building blocks of the universe. They are made up of a single energy or element that overwhelms all others. The natives of Inner Planes are made of these elements as well.
The Inner Planes can be divided into two groups: Primal energy planes, which symbolize the physical properties of the universe (earth, air, fire, water, entropy and darkforce), and the planes of order and chaos, which represent the creative and destructive forces of the universe (positive and negative energy).

Plane of Non-Existence
Also known as: The Darkforce dimension, the nothing, the void
Known races: the nothing

The homes of beings of great power, these planes are also called the godly planes, spiritual planes, or divine planes. The deities themselves live here, as do creatures such as the Caelesti and the Rhakshasa. The Outer Planes tend to have alignments, representing a particular moral or ethical outlook, and their inhabitants tend to behave in agreement with those alignments. The Outer Planes are also the final resting place of spirits from the Material Plane, whether that final rest is calm introspection or eternal damnation.

This catch-all category covers all extra-dimensional spaces that function like planes but have measurable size and limited access. Other kinds of planes are theoretically infinite in size, but a demiplane might be only a few hundred feet across. Access to demi-planes may be limited to particular locations (such as a fixed gateway) or particular situations (such as a time of year or a weather condition). Some demiplanes are created by spells, some naturally evolve, and some appear according to the will of the deities.