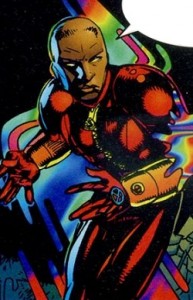 Everett Thomas was born into a well-adjusted, loving family in St Louis. At school he was a straight-A student and got along with pretty much everyone. When his mutant powers developed, his parents were competely supportive and so he never resented being a mutant as some of his later teammates did.

Everett was one of the young mutants targeted for harvest by the Phalanx, but he was never actually captured. Instead he was located by Sean “Banshee” Cassidy and Emma Frost and helped to rescue Husk, Monet “M” St Croix, Angelo “Skin” Espinoza and Clarice “Blink” Ferguson. After this incident, he joined the newly formed Generation X.

Everett quickly became popular with his teammates and formed particularly close bonds with Jubilee and Skin, and later with Monet. Eager to learn more about his powers, he spent his time at the Masachussetts Academy pushing himself as far as he could go, and often annoyed the others by using their powers better than they themselves could.

His time at with Generation X was not all smooth sailing, however. He was once possessed by Emplate, who teleported Everett back to St Louis. Everett then attemtpted to turn his family into creatures like himself and Emplate but was saved by a combination of his own reluctance to harm his family and the intervention of usk, M and Jubilee.

Later, he put himself at massive risk in an attempt to disarm the bombs that Adrienne Frost had planted at the Academy. Although he succeeded in saving the school and its pupils, Everett could not save himself and was killed. His death left the team in a state of shock, but none were as badly affected as Jubilee and M. The incident served to bring the two girls closer together as they both acknowledged the feelings the other had had for Everett.