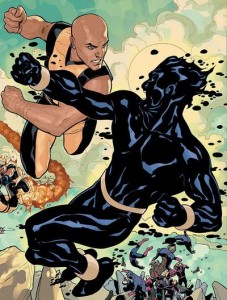 Roberto Da Costa is the son of a deceased Brazilian millionaire and his American wife Nina, an archaeologist. Roberto first manifested his superhuman mutant powers when, at the age of fourteen, he was playing in a championship soccer match for his school team in Rio de Janiero. Motivated by racial hatred, a boy named Keller and another member of the opposing team knocked Da Costa to the ground. The hot-tempered Da Costa retaliated by tackling Keller, who began brutally beating him. It was then that, without being aware of what was happening to him, Da Costa first became able to use his superhuman strength, his body and clothing temporarily turning black in the process. Da Costa used his newfound strength to hurl Keller from him. Bewildered, Da Costa sought help, but both the other players and most of the spectators panicked and fled. However, his girlfriend, Juliana Sandoval, who had been watching the game along with Emmanuel Da Costa, stood by Roberto in his time of need.

Roberto’s powers came to the attention of Donald Pierce, the renegade White Bishop of the Inner Circle of the Hellfire Club, who sought to murder any superhuman mutants he found. Pierce’s mercenaries failed to abduct Roberto, but then they kidnapped Juliana. The mutant telepath Professor Charles Xavier had learned of Pierce’s plan to kill Roberto and sent his colleague Moira MacTaggert and the young superhuman mutants Karma and Mirage to help Da Costa. Roberto agreed to meet with Pierce’s men in order to obtain Sandoval’s release, but the mercenaries refused to free her and intended to keep Da Costa prisoner as well. One of the mercenaries was apparently about to shoot Da Costa when he again became superhumanly strong and fought them, but the young mutant exhausted his power too soon, and a mercenary was about to kill him when Karma and Mirage intervened. Karma took control of the mind of the mercenary, and Mirage used her powers to terrify the others. But Da Costa, regaining his superhuman strength, knocked Karma unconscious, thinking her one of his assailants, thus breaking her hold on the mercenary. That mercenary fired at Da Costa, who had returned to normalcy again, but Sandoval leapt in front of Da Costa, taking the fatal bullet herself. Mirage defeated Sandoval’s killer. Anguished with guilt that Sandoval had died because he was a mutant and thus had become the target of these killers, Da Costa vowed to take vengeance on Pierce. He joined Karma, Xavier, and another young mutant named Wolfsbane, in tracking down Pierce and battling him and his men. Xavier succeeded in defeating Pierce.

Da Costa decided to stay with Xavier and receive training in the use of his superhuman powers as a member of the New Mutants. Ironically, his father Emmanuel later became a member of the Inner Circle of the Hellfire Club.

At present Sunspot is a member of X-Force, the team that was originally largely composed of former members of the New Mutants. In a battle against the mutant terrorist Reignfire and the Mutant Liberation Front, Sunspot was kidnapped. Months later Reignfire was unmasked as Sunspot. Fortunately, Cable was able to rehabilitate Sunspot through his Askani discipline and training.