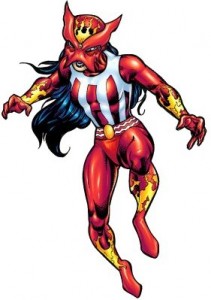 Leyu Yoshida is the younger sister of the mutant hero Sunfire. It is believed that she is actually his half-sister since Shiro stated that his mother died giving birth to him. She inherited the same powers as Sunfire along with the same arrogence that he showed early in his career.

She first came to light when Jean Summers contacted Sunfire for aid against Magneto, who had kidnapped Charles Xavier. Instead of Sunfire Leyu showed up and claimed Sunfire was not interested but that she thought it would be fun to help them. She journied to Genosha with the rest of Jean’s recruits and was immediately involved in a battle with Magneto.

The master of magnetism easily defeated the young mutant and her teammates. Cyclops and Wolverine rescued the young team and Leyu refused their invitation to remain with the team. Sometime later she reappeared as a chief lieutenant in Banshee’s X-Corp. She was attacked and presumed killed during a mutiny incited by Avalanche and the Blob. What she did between her time with the X-Men and joining X-Corp is unknown