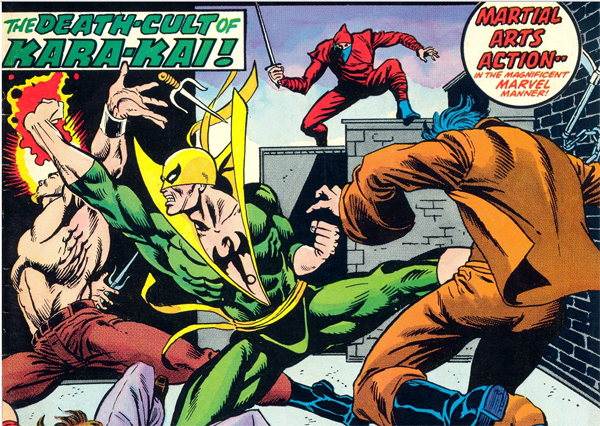 Martial Arts A: This form of martial arts concentrates on using an opponent’s strength against him, and is typical of oriental- American forms such as judo and karate. The practitioner of this type of martial arts can Stun or Slam an opponent regardless of their comparative Strengths and Endurances.

Martial Arts C: This form of martial arts concentrates on holds and escapes. The practitioner of this form gains a + 1CS to his Strength for Grappling attacks (including damage), a + 1CS to Strength for Escaping and a +1CS to Agility for purposes of Dodging.

Martial Arts D: This meditative form of martial arts searches out the weak spots of the opponent’s defenses and strikes against them. The practitioner of this form of attack may ignore the effects of Body Armor (though not force fields) for determining Stun and Slam results. The attack by the character with this Talent does not have to inflict damage to force a check for possible Stun and Slam. The disadvantage is that the target of this attack must be studied for two rounds before the effects may be brought into play. The character with this Talent does not have to attack the character, only watch him in battle for two rounds previous to attacking.

Martial Arts E: This form of martial arts encourages quick striking to catch the opponent off-guard. Heroes with this form of Martial Arts are at a +1 to initiative rolls in unarmed combat.

Thrown Objects: The hero with this Talent gains a +1CS with all Throwing attacks (both Edged and Blunt), and +1CS on Catching. This applies to both thrown weapons and normal items. If the hero has the Thrown Weapons Talent as well, the modification is +2CS when using thrown weapons.

Acrobatics: The hero with this Talent is very limber and as such gains advantages when under attack. The hero has a +1CS when dodging, evading, and escaping.

Tumbling: The hero with this Talent knows how to fall and land without undue injury. Individuals with this Talent may make an Agility FEAT to land feet-first after any fall that does not inflict damage.

Tagged with: Fighting Talents, Talents
Posted in Talents
Check out our Downloads section!