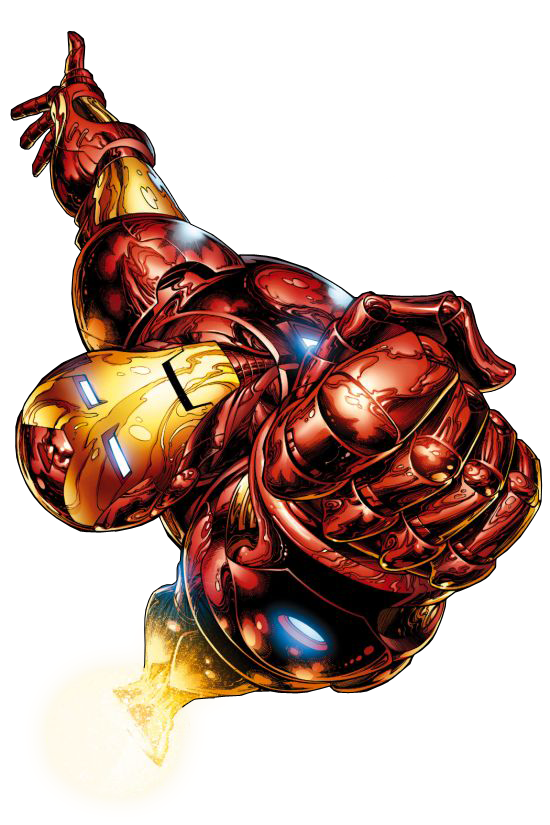 High-Yield Arc Reactor: The armor and Stark’s own body are powered by the high-yield arc reactor mounted in his chest. The high output of the arc reactor has given Stark the following:

Multi-Task: Stark is able perform up to 3 non-die-roll actions simultaneous to any other declared combat actions. For example, while fighting he can scan area, access data-files and conduct business.

Learning Capability: Stark is able to learn faster with Am ability.

Bleeding Edge Body Armor:
This entire armor is kept inside Tony’s body until mentally commanded in which it manifests itself as the Iron Man Armor. The armor is made up of Nano-Machines that can now be commanded to turn into any type of structure upon Stark’s skin. The Bleeding Edge Armor enables the wearer the abilities shown below:

Weapons Systems: The Bleeding Edge Armor has the following weapons:

Alter Ego: When not wearing the Ironman suit Tony Stark has the following abilities:

As a former industrialist playboy, Tony Stark has numerous contacts throughout the engineering, business and entertainment world. He also has numerous contacts throughout the intelligence community, thanks to his former days as a munitions developer. Finally, he is founding member of the Avengers, and is a close friend and ally of Captain America, Thor, Hawkeye, the Black Widow, Jack of Hearts, and Nick Fury of S.H.I.E.L.D. His personal confidants include James Rhodes (formerly Iron Man II; formerly War Machine I), Bethany Cabe, Harold Hogan, and Pepper Potts.

Anthony Stark was born to the family of Howard Stark (a wealthy industrialist) and Maria Stark, and inherited the family company at an early age. When he was in Viet Nam supervising his US munitions supply, he was fataly wounded in the heart and captured by communists who wanted him to build a weapon for them. Instead, he created the first of the Iron Man armors that would help his health as well as providing an escape. He was helped fleeing the country by James Rhodes.

Stark kept himself alive through the use of the armored chest plate, and played a dual role as industrialist / millionaire / playboy Stark, and bodyguard / Stark employee / adventurer Iron Man, stopping corporate espionage, founding and supplying SHIELD, and founding and joining the Avengers. Later, among various armor redesigns, Stark recieved a heart transplant, oblivating the need for his armored pacemaker chest plate.

Then, over time and during Stark’s long bout with alcoholism, Obadiah Stane managed to wrest control of Stark’s company and bring Stark to virtual poverty. At this time, Rhodes took on the Iron Man identiy. Soon, Stark and his friends were able to form a successful rival company, Circutis Maximus. After a while, Stark’s battle with Stane was brought to a head, and Stark regained control of his father’s company. Stark also began his recovery from alcoholism.

Soon, he discovered that technology developed by Stark Int’l was being used by armored criminals, and thus began a long “Armor War” as Stark tracked down all evidence of his corrupted technology. This led him to violate many laws, and even kill the Soviet agent, Gremlin. The US Army sent an armored soldier, Firepower, to apprehend Stark, who ultimately faked his death, using an “Iron-Man-as-Stark-employee”excuse to come back as Iron Man again.

Later, he was shot by Kathy Dare, an old girlfriend in an insane rage of jealousy. This left him severly injured, paralyzed from the waist down. He could, however, fully function while in the Iron Man armor, and he remained increasingly dependant on the armor until a microchip device was implanted in his spine to enable him to walk again. However, his body later rejected the implant, and Stark’s body was put in a cyrogenic freeze, after which Stark legeally died, and Rhodes took over running Stark’s business.

Stark recovered, however, and took on the mantle of iron once again, much to the chagrin of pinch-hitter Rhodes. Rhodes left Stark Int’l to become his own hero, War Machine, although Stark and Rhodes later repaired their friendship.

Subsequent activities led Iron Man to help disband the Avengers’ West Coast branch and set up Force Works, before he influenced by the time-travelling manipulator Immortus. Becoming a traitor to the Avengers, Stark murdered the Avengers’ nanny Marilla, Avengers’ associate Yellowjacket II, and even a Force Works public relations manager. Stark ultimately faught a younger version of himself (brought from the past to fight him,) with both heroes mortally wounding the other. Before he passed away, Tony Stark tried to redeem himself by providing plans for a pacemaker chest plate that would save the life of his younger self and would pave the way for him to be the next Iron Man.

This new Iron Man later sacrificed himself to the psychic-energy villain Onslaught, and was shunted to a pocket universe. Upon re-emerging from this universe, Iron Man was reborn into the body and the memories of Tony Stark as he appeared before Immortus’ manipulations. Finding Stark International bought by the Fujikawa Corporation, Tony Stark set up a new business for himself, Stark Solutions, as a technological consulting firm, and reassumed the Iron Man indentiy. Iron Man was on hand to reassemble the Avengers as well. Stark set up a new base of operations in his Seattle home, and eventually rescued the robot Jocasta, allowing her to interface with his mansion’s computer systems.