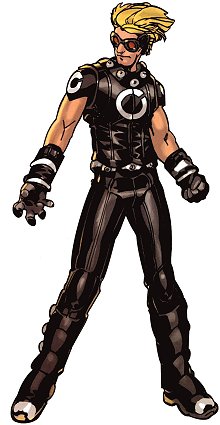 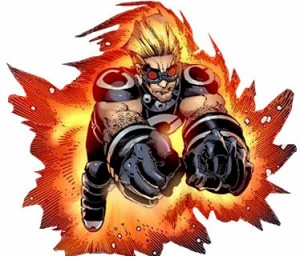 Sam Guthrie is a mutant whose latent superhuman abilities first manifested themselves when he was trapped with co-workers in a coal mine. The stress of trying to save his partner and himself triggered his propulsive power and enabled them to escape. Donald Pierce, a renegade member of the Inner Circle of the Hellfire Club, located Guthrie and learned of his superhuman powers by means of a machine the Hellfire Club had built by adapting plans they had stolen from Professor Xavier’s Cerebro device. Pierce recruited Guthrie to be one of his operatives, and sent him into battle against Xavier and his newly organized group, the New Mutants. However, during the battle, he refused to obey Pierce’s order to kill the New Mutants, and Pierce attempted to kill Guthrie in retaliation. Xavier, however, saved Guthrie’s life by defeating Pierce. Realizing that Guthrie was not an evil person, Xavier invited him to join the New Mutants, and Cannonball rose to become one of the New Mutants’ leaders.

When the mutant warrior from the far future, Cable, reorganized the New Mutants into X-Force, Cannonball became a member of the new team.

On one of X-Force’s first missions, Cannonball was apparently slain in combat by Sauron, a member of the Toad’s new Brotherhood of Evil Mutants. However, Cannonball soon returned to life and full health. Cable theorized that Cannonball was one of the Externals, a small number of immortal mutants. Whether or not Cannonball really is an External remains to be seen.

Recently, Sam graduated from his leadership role on the mutant team, X-Force, to the X-Men.