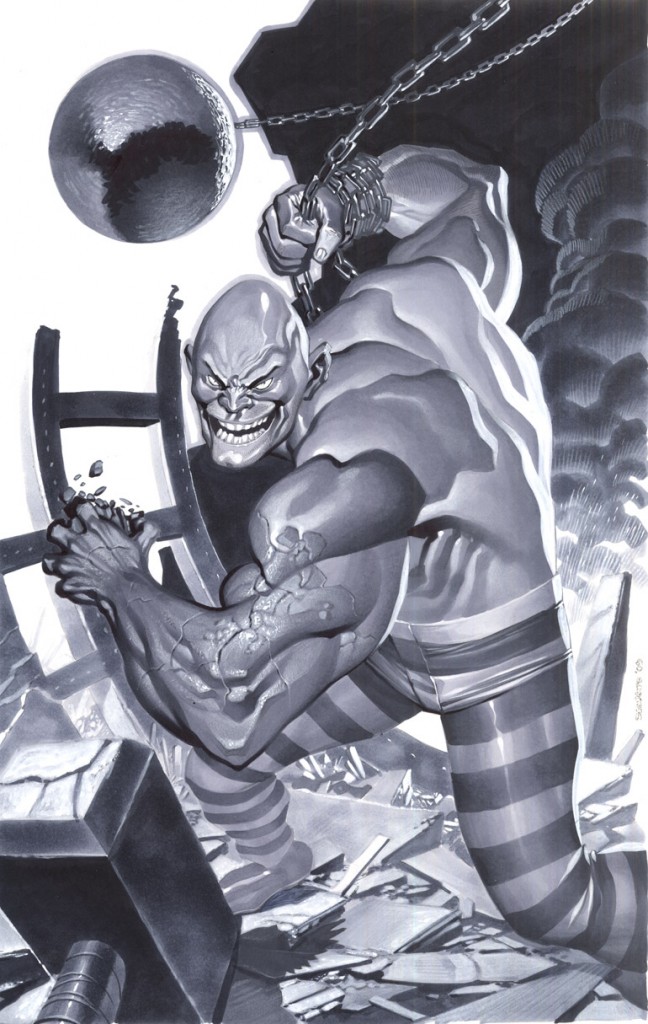 Carl Creel’s life was little more than any common criminal. While serving time in prison for aggravated assault committed while a member of an extortion racket, Creel was selected by Loki, the Asgardian god of mischief, as his unwitting agent in a scheme against the Asgardian god of thunder, Thor. By adding an enchanted potion composed of rare Asgardian herbs to Creel’s drinking water in the prison commissary, Loki granted the brutal convict a bizarre power he hoped would enable him to defeat Thor. Creel used his new-found power to break free from prison and soon became engaged in ballte with Thor. Due to the properties of Thor’s hammer and Thor himself, Creel, no calling himself the Absorbing Man, Thor soon overcame his foe.

After his first defeat, the Absorbing Man returned to plague Thor again, and Loki transported him to Asgard, where the criminal could be used in his scheme to take over Asgard. But when the Absorbing Man dared to challenge Odin, lord of the Asgardians, Odin summarily dispatched him into space. Creel eventually managed to return to Earth by hitching a ride on a comet. He soon encountered the Hulk, however, and was defeated while in the process of absorbing the Hulk’s power during his transformation back into his alter ego, Bruce Banner. The Absorbing Man later challenged Thor again but was defeated when he was tricked into turning into water, the first time he attempted such a feat. A short time later, Creel managed to reintegrate himself, fight Thor and later the Hulk, only to find himself defeated time and again.

Eventually reassembling his body after his last defeat, Creel decided that he was tired of fighting against and losing to super-human champions. Seeking to flee the country, Creel foolishly took a hostage, thereby bringing the super team of the Avengers after him. Creel escaped into the ocean, transforming himself into water. When he finally regained his natural form, his mind was addled from his prolonged intermingling with the ocean, and was paranoiacally frightened of any one with a superpower. A chance battle with the Hulk cured him of his paranoia, however. Returning to America, he stalked the mutant Dazzler to acquire her light-powers to use against the Avengers. He was defeated, however, by the Dazzler and the Inhuman Black Bolt.

Creel was abducted from prison by the omnipotent alien known as the Beyonder to fight the so-called Secret Wars, after which he was restored to Earth. During this time, Creel met the villainess Titania, and the two developed a relationship. Upon their return, Creel and Titania were contacted by the second Baron Zemo, who was forming a new team called the Masters of Evil. After several independent assignments, they were defeated by the second Ant-Man and the Wasp.

Creel continued to engage in various criminal activities, most often with Titania, although the two often ran afoul of one superhero or another, including his arch-enemy Thor.

After many months, Titania and Creel got married. Both villains had turned away from more malicious actions, preferring to quietly keep each other’s company, although they never gave up bank robberies and other activities completely. Creel and Titania occaisionally continue to come into conflict with superheroes, such as when the Avenger Black Widow was under a vendetta to dispose of all Avenger’s villains, when she shattered Creel’s altered form. Another time, Creel was duped by the villain Crossbones to keep Captain America busy while Crossbones ignited a bomb. Creel, however, claiming not to be a murderer, absorbed the properties of Captain America’s sheild to save the city from the explosion. Creel escaped to seek revenge on Crossbones.

Posted in Marvel Villains
Check out our Downloads section!